Where Do You Run When the Wind Knows Your Name? 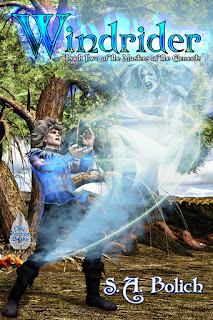 "Leave singing to the Hag to Fifth Ranks, lad, if you don’t want to end up a witless madman shrieking to the storm from a cell in the Tower of Winds."

Good advice, all in all. Sheshan ak'Kal lives to regret that he did not heed it. Desperate to remember the windsong that once let him sing even the great storms off the sea to tatters, he forgets for one foolish moment of shared rage that Wind's gentle sister is the angry, vengeful— and quite insane—Hag.

With the Hag stalking him across Metrenna, singing a wild, terrible note that only he can hear, Sheshan discovers that weaving torrents of living air between his hands is no longer enough to keep her at bay. For his clan, his life, and a fragile new love he has found with the most unexpected of women, Sheshan must learn a new song, and become what none of his people have managed in millennia--a Windrider indeed.