5 Stars for One-Way Ticket to Midnight 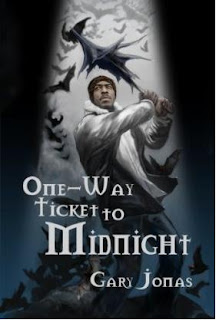 Roy Porter lives on the streets of Tulsa, his music all but forgotten. When his friends start dying in horrible ways, Roy realizes he's seen the pattern of death before. The cops are searching for a regular killer, but Roy knows there's more going on and if he doesn't act, he might be next on the death list.
He teams up with Jim Hartford, a tough biker with a haunted past, to hunt down the killer. But how can this unlikely pair hope to face up to a killer with powers born from the depths of evil? They're on a train bound for hell and it's a one-way trip.

When I began to read this story, the main character Roy Porter captured my interest. He’s not the typical main character. At some point he gave up on life and became homeless. This doesn’t sound like a hero. His life gets even worse when he becomes a suspect in a string of unusual murders because he knew all of the victims. Of course, he didn’t do it and he tries to get help from his friend Jim who is a psychic, into the mystical and uses his power for good. As the story progressed, I wanted to know how Roy got to the point where he gave up on life. These details are dished out in a way that kept me wanting to turn the pages to find out more. Jim also made me curious. There is comic relief between these two, and they make for an entertaining pair as they try to stop the real killer who, of course, uses his magic for evil.
Roy has many obstacles to face if he’s going to clear his name and the problems become bigger than that as the real killer grows in power. He is up against both dark external forces and his own internal conflict. Roy has to solve both if he’s going to survive, and I found the way the author weaved these two elements together masterfully done. This is what makes "One Way Ticket to Midnight" a 5 star read.